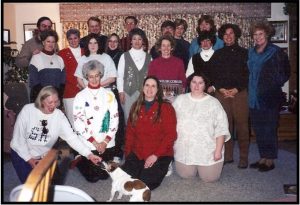 This year, the CCWCC celebrates it’s 20th. anniversary. The club was formed after a get together of four Cardigan fanciers who had met to view a litter of puppies. The conversations led to a remark about the lack of a local club and it was decided to try to fill that void with forming one of our own. Our goals were as one: to have a fellowship of Cardigan owners who wished to share their knowledge and experiences of these great dogs. Those four founding members were Pam Allen, Debbie Moore, Cathy Ochs-Cline and Shirley Hobbs.

An awful lot of work was involved in getting this club started, but due to the efforts of Debbie, who served as our president for many years, the task was accomplished. We still have to abide by AKC regulations and provide activities and education on a regular basis, this is achieved through our Match, meetings, Specialties, and the other fun stuff the board tries to offer you.

Our club has offered in the past, herding, obedience, agility, lure coursing, tracking and barn hunt demonstrations. These will be ongoing as the opportunity arises. Also, of course our Regional Specialty covers the conformation venue.

It has been a hard and sometimes difficult task to keep the club going and try to find interests for the membership. On that note, if anyone has an idea or helpful thought on how to better serve the club and it’s followers, please , do not hesitate to come forward, we are always open to suggestions.

We are dedicated to the promotion of the Cardigan Welsh Corgi in the Chesapeake area, which covers Delaware, the District of Columbia, Maryland, and Virginia. View all posts by chesapeakecardis