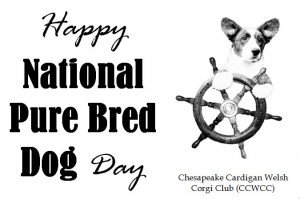 This is the day to “celebrate the diversity, heritage and predictability of the purpose bred dog.” Show your support by using the following hashtags on your social media sites, such as Facebook, Instagram, Google+, or Twitter: #purebreddogs and #nationalpurebreddogday

History
A small but hardy dog was found centuries ago in the remote, misty green hills of Cardiganshire in Wales. He was a “Corgi,” “Cor” for dwarf (or perhaps “cur” for working dog) and “gi” (with a hard “G” sound) for dog. This “ci-llathed” or “yard-long” dog was highly valued by his family as affectionate companion, guard, general farm worker, and driver of cattle. In fact, ancient Welsh law provided for severe penalties to those who harmed or stole one of the little “corgwn,” because the corgi’s talents could help determine his family’s economic status.

Never numerous and sometimes confused with the more common tailless Pembroke Welsh Corgi, the Cardigan is a separate breed of ancient lineage, descended from the Teckel or Dachshund family. The earliest Cardigans were heavy, golden or blue merle with perhaps drop ears. Careful crosses were made with working qualities in mind, probably with brindle and red herders; the result was also more refined, dignified and foxy-looking.

Beyond the Home
As a recognized AKC breed, the Cardigan can compete in AKC dog shows. However, he does not have to be limited to conformation. In keeping with their Welsh farm heritage and intelligence, Cardigans do well in obedience, tracking, agility and, of course, herding trials. [CWCCA]

Personality
One of the best features about a Cardigan is his personality. A big dog in a small package, his temperament is based upon his original life as a companion and valuable farm helper and guardian, all of which make him an adaptable and outstanding housepet. The Cardigan Welsh Corgi is a dog who wants to be truly involved with his family; his family should WANT to become involved with him too. He is full of fun and will shower that family with devotion and sensible affection, although some Cardigans withhold their favors from strangers until they get to know them better. Caring for his people (including children) comes naturally to this intelligent, alert and responsible dog. Because they’re expressive and trainable, Cardigan Welsh Corgis have also been seen in several recent motion pictures.  [CWCCA] 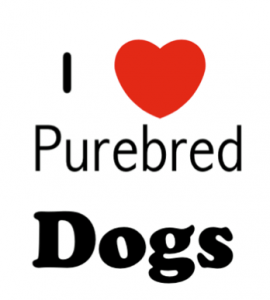 We are dedicated to the promotion of the Cardigan Welsh Corgi in the Chesapeake area, which covers Delaware, the District of Columbia, Maryland, and Virginia. View all posts by chesapeakecardis